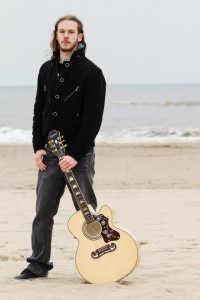 Hi there! My name is Lennert Kemper, born on December 30th, 1991.  I am a professional guitarist, composer, teacher/coach, performer and recording artist from the Netherlands.

Being brought up in a family of music lovers and some hobby musicians, my interest in music started at an early age. My first music lessons started in my primary school years, during school music class and taking a year of percussion and big band lessons. However, I was brought up with a lot of guitar orientated music – mainly rock and blues. As I got older, my interest for music and especially the electric guitar grew heavily. When I was 14, I eventually started playing guitar and taking lessons from my first guitar teacher: Phil Cosby. I have never looked back since and my obsession with the instrument has never stopped!

I joined my first band at age 15 and have never stopped playing in bands since. Especially my first band experience, playing my first shows nationwide, writing and recording original songs, was a turning point in my life. It was then that I decided I wanted to become a professional musician. As a result, I took my music studies further by completing a conservatory preparatory program at the international Malcolm Davies Music Centre in The Hague, where I studied guitar and music with multiple talented teachers, including Rik Fennis, Fredo Wagner and Ezequiel Menalled. I was heavily influenced by progressive rock, instrumental rock, metal and blues music, but during these years I was exposed to many more styles, including jazz, fusion, classical, pop, funk and world music, all of which have found their influence in my playing. I developed rapidly as a player and as an allround musician. During this time, I also started teaching guitar privately. I quickly developed a passion for teaching and helping others, eventually leading me to specialize in music pedagogy for my bachelor’s degree. In addition, I took multiple online courses, including from Berklee Online and participated in workshops and masterclasses by virtuoso guitarists, including Andy Timmons and Mike Stern.

Over the last 10+ years, I have recorded, written and toured internationally with several bands, projects, artists and producers in a multitude of popular music styles, as a session musician or as a permanent band member or band leader. These include Dreamwalkers Inc., Elithium, Kristoffer Gildenlöw (Kayak, Pain of Salvation, For All We Know, Neal Morse, Robby Valentine), TDW, ReSolve, Dan Pierson (Ayreon), various singer-songwriters, pop bands, cover bands, theater shows and local television. I have had the pleasure and honor of being featured on albums alongside world-class musicians such as Marco Sfogli, Chris Zoupa, Vikram Shankar, Mike Mills, Rich Gray, Fabio Alessandrini, Lola Damblant-Soler, Andi Kravljaca, Daniel Magdic, Frank Schiphorst, Mendel Bij de Leij and Bob Wijtsma. Alongside original band projects and session work, I am currently also writing and recording my first solo material.

I have also been teaching guitar, music theory and songwriting to all ages and levels, as well as coaching bands since I was 16, on a mission to inspire and help others reach their musical goals. As a teacher, I genuinely care about my students’ progress and have taught, coached and mentored hundreds of students. My goal is to keep doing so and make a difference in people’s musical lives. I have demonstrated teaching experience both in private and group lesson formats, in person privately, at local (music) schools and online worldwide through Zoom, Skype, Microsoft Teams and video correspondence lessons. Currently, I teach locally at my music lesson studio in Voorburg, at the Goudse Popschool and Muziekmeesters Westland in the Netherlands, as well as online internationally via the above named media. I have also started work on my first educational books and online video courses.

Feel free to get in touch for more information!

Few people know, but I’ve been into online casinos for a long time. And I would like to take this opportunity to recommend online casinos in Canada, namely casinosworld.ca. Click to read more tips about online casino games and here you can be the first to get bonuses and free spins at the best gambling clubs in Canada.
Is it worth it to play at online casinos?
People have different opinions about online casinos, because as many people as there are opinions. In this article, let’s break down the main pros and cons.Some people play online casinos all the time, spending most of their salary on this pastime. Others occasionally play just to get a little adrenaline, as well as try to break the bank, but trying to save most of your money. Others do not like online entertainment at all (or they choose entertainment of another kind, for example, like to ride on tanks in World of Tanks), they treat online casinos with indifference.One belief is constant – many people all over the world play various online casinos with varying success. As statistics show, players from all over the world prefer dollar casinos.

“The guitar solos are mad, manic and, ultimately, a hell of a lot of fun” – Progradar